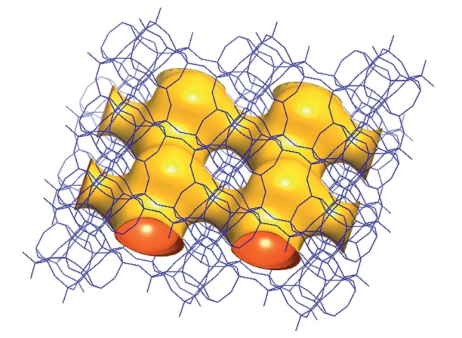 Zeolites are ideal catalytic materials because they have nanostructure on the same scale as the molecules that react within their pores. Their nanostructure is a function of the conditions under which they are created, and because of the molecular scale of the catalytic surfaces, their macroscopic properties are thus a function of those same conditions.

Zeolites are microporous crystalline oxides with a high surface to volume ratio. Strictly speaking, they are aluminosilicates of form Mx*(Si1-x+Alx)O2*y H2O, but the Davis group is also interested in many zeolite-like materials that are also microporous and have important catalytic properties, such as aluminophosphates, zincosilicates, and titanosilicates.

Though the catalytic properties of zeolites are of central interest to the Davis group, they are primarily used (by mass) as adsorbents and ion-exchange materials. They were first used for organic synthesis in the 1960s for catalytic cracking of petroleum. ZSM-5, first synthesized in 1967, was applied to numerous refining and petrochemical processes with great success.

How are zeolites made? 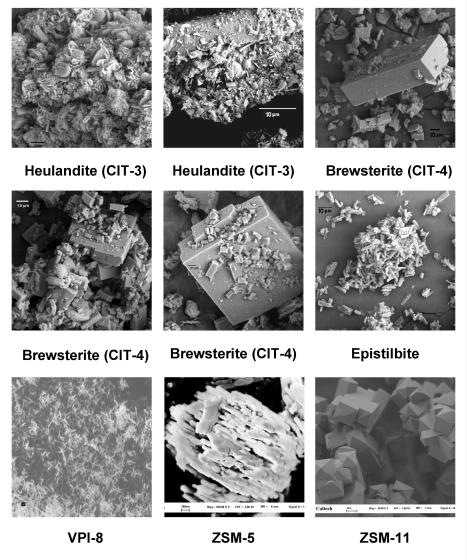 SEM images of various zeolites from the MED group

Making zeolites is a delicate art. Typically, the experimenter will combine non-molecular building blocks like alumina and silica with some alkali metal hydroxide and water, then incubate the mixture in an enclosed environment at 50-200 degree Celcius for a certain period of time. Organic chemicals called Structure Directing Agents (SDAs) are often added to steer the self-assembly of the zeolite in a desired direction.

Zeolite synthesis is not similar to synthetic organic chemistry. The zeolite is assembled through a series of spontaneous molecular recognition events that cannot be understood in the same dot-and-arrow schema that synthetic organic schemes are constructed from. In fact, this process is not very well understood at all.

The final structure is a product of synthetic conditions and the post-synthetic treatment. One of the most interesting factors the experimenter controls is the hydrophobicity and structure of the SDA. Though this relationship is not facile, several lines of research in the Davis group have turned up explanations and successful predictions of final nanostructure as a function of SDA choice. See scanning electron micrographs of zeolites synthesized by the Davis group (below).

You can read more about zeolites and other ordered porous materials in recent reviews:

Before the synthesis of VPI-5, the largest zeolites had pore sizes below 10 angstroms. The pores of the zeolites contained 12 oxygen atoms or fewer. In 1987, the Davis group synthesized the aluminophosphate VPI-5, an 18-ring microporous material with a 13 angstrom pore diameter. This was the first of a series of extra large pore zeolite-like materials.

In 1997 at the California Institute of Technology, the Davis group synthesized CIT-5, an extra-large pore 14-ring zeolite with a pore diameter of just over 10 angstroms–the second extra-large pore zeolite discovered. This represented an important development in the field because CIT-5 has the high thermal stability of a high-silica zeolite, but large pore size like VPI-5 and its successors. And unlike UTD-1, the first extra-large pore zeolite, CIT-5 does not require an organometallic SDA and the lengthy post-synthetic workup that follows. CIT-5 is structure directed by N(16)-methylsparteinium with lithium cations: 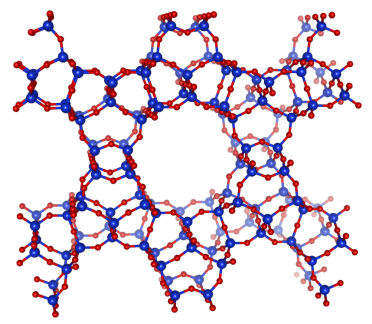 Why are extra-large pore zeolites important?

The range of reactions over which a zeolite can apply shape selective pressure is a function of the zeolites pore size and structure. Zeolites with pore sizes between ten and twenty angstroms would impact fine chemicals, pharmecuticals, and life sciences.

Current methods for zeolite synthesis use organic molecules as their SDAs. Once the synthesis is complete a high temperature combustion step is required to remove these SDAs from the zeolite framework. This process both destroys the SDA, a high cost material, and the energy release and the water produced in the combustion can damage the inorganic structure.

In 2003, the Davis group reported a methodology for the synthesis of zeolite ZSM-5 using a SDA with an attached cyclic ketal group that can be fragmented inside the zeolite. The fragmentation allows the parts of the SDA to be removed without a high combustion step in the treatment. Also, once removed the fragments can be recombined to form the original SDA, hence the “recyclable SDA”. The concept of the methodology is shown here. 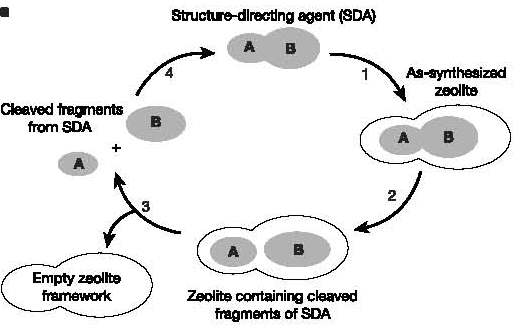 In the diagram above the methodology follows 5 basic steps:

As noted the “recyclable SDA” methodology provides a way to produce zeolite with out destroying the high cost SDA. Also removing the combustion step is beneficial for forming various zeolite products such as molecular sieve membranes that can be damaged by the mechanical stresses of thermal expansion or low dielectric components that need air to fill the microporous space to achieve the desired properties.

The Davis group is currently using the methodology to prepare larger SDAs and testing it with the synthesis of other zeolites.